In late July/August, I undertook a very intensive few weeks of solo research and development: working title – having and recovering from a stem cell transplant. My 'residency' took place in hospital – I was in hospital and mostly in isolation for the best part of a month.

A bit of background: I've been a bit quiet this year, and a bit less involved in Tangled Feet productions, because at the end of February I was diagnosed with lymphoma, which is a type of blood cancer. I had become more and more unwell through the January/February lockdown with a load of weird and increasingly alarming symptoms, and  eventually had a scary emergency hospital admission where an xray and a CT scan picked up a large mass which was squashing my heart and lungs. I was diagnosed as Primary Mediastinal B Cell Lymphoma. Somewhat ironically the b-cells in my blood – which are a part of my immune system – had gone rogue and were effectively trying to kill me. It goes without saying that being diagnosed with an aggressive cancer at 41 is completely terrifying and causes your world to shift on its axis. 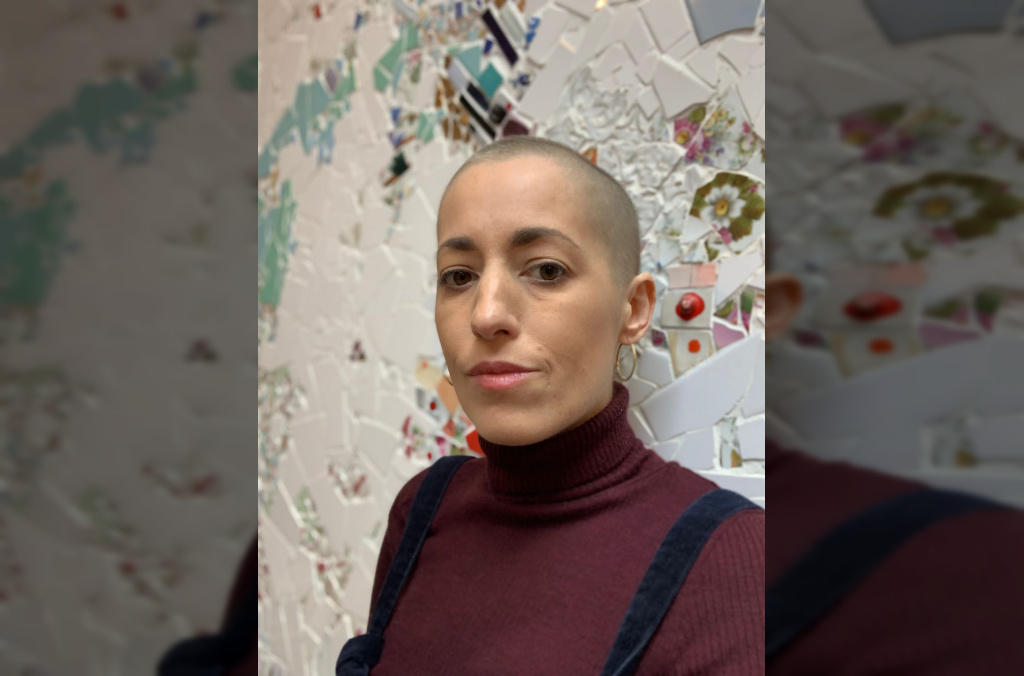 The initial plan was six cycles of intensive chemotherapy, each cycle requiring a 5 or 6 day hospital stay attached to chemotherapy drips 24 hrs a day. Initially, the doctors were optimistic that the chemo would knock it on the head and I would be cured. I was adamant that I wanted to continue working and being creative (what's the point of life if you aren't staying creative?) and I was managing to continue my core role with Tangled Feet in between hospital stays, working on Devolution Evolution, and hoping to be returning to normal this summer. Unfortunately, just before my 5th chemotherapy cycle it became apparent that my cancer was growing back and had become 'refractory'. This meant a change onto an even stronger treatment for my last two cycles, and then pending a clear PET scan (which fortunately I got) the prospect of a stem cell treatment to try to keep me in remission. This was a huge mental blow, just when I could see some light at the end of the tunnel with the original line of treatment, as I was now staring a really hard and unpleasant treatment and much longer and more fragile recovery in the face.

A stem cell transplant (sometimes called a bone marrow transplant) involves giving you a really toxic dose of chemo (one of the chemicals in the chemo is basically mustard gas) which annihilates your damaged bone marrow and immune system. You are then given  some stem cells back as a starter-for-10 to rebuild all the cells that have just been killed (otherwise you wouldn't recover from the chemo). The chemo knocks all your blood counts to zero meaning you are intensely susceptible to infection and have to spend the next few weeks in a sterile isolation while you wait for the new stem cells to make their way to your bone marrow and start producing new blood cells. It's about as fun as it sounds: 0/10, would not recommend. The medics warn you that the recovery is going to be really unpleasant – the cellular damage from the chemo is horrific and completely screws your digestive system as well as your blood and bone marrow. I won't go into specifics but they aren't mucking about – it was f***ing horrible.

I had an autologous transplant, using my own stem cells (rather than a donor) which were harvested and then frozen a few weeks before my transplant. I drew some comfort from the fact that I essentially produced the medicine which would enable me to recover from the mustard-gas chemo.

Cancer is a major blow to your identity. It transported me instantly from being someone who was largely in control of my world, making things happen as a theatremaker, co-leading a company, an active parent and partner, cracking on with a house renovation and building a new life in a new part of the UK (we had – very luckily – just moved to Cornwall to be near my parents)... to someone who has suddenly become a patient, who has to submit to a huge number of invasive, scary and sometimes painful medical procedures, someone who quickly doesn't recognise their own body (bald and with PICC/Hickmann lines coming out of it) who has to completely rearrange life around endless medical appointments and rely totally on others for help. I haven't been able to do basic stuff for myself, let alone look after my own children, for large parts of this year, which has been enormously hard. I thought I'd be supporting my parents. Turns out they've been looking after me.

Throughout, though, I've clung on like a limpet to the idea that being ill doesn't stop you being an artist – even if you are too tired and wrung out from the mental and physical effects of coping with cancer to 'produce' much art. (I did manage throughout my treatment to create an 'alter-ego' called Lynne Fomo, which I shared, along with some writing, drawing and my Pinterest inspiration board, with the Devo Evo cohort – you can see some of that on the Devolution Evolution site.) Being confronted with a month-long hospital stay for my stem cell procedure, I decided that I was going to doggedly treat it as really hardcore R and D. This might sound ridiculous but it kept one very important part of me alive even as another part of me was being killed off.

I don't know what the output will be from my intensive R and D yet. I did (optimistically) take in my laptop, notebooks and all my sketching materials but was so unwell that I have nothing to 'show' from my hospital 'residency' except for a collection of very intense notes and voicenotes in my phone documenting some of the darkest, hardest parts. Physical recovery from a stem cell transplant is 3-6 months before you feel remotely normal and up to a year to regain your stamina – if you get it all back. Two months on, I'm only just strong enough to spend the whole day out of bed.

My mind, however, has not stopped whirring. I don't want to (and can't) speak for all cancer patients but for me there has been a huge shift of perspective that occurs when the floor drops away with a diagnosis. Not being able to take for granted your health, your autonomy or even, at some points, staying alive, makes your head spin. Having to pitch all your faith suddenly on the wonders of medical science, placing your trust in extraordinarily poisonous drugs administered by extraordinarily caring nurses completely changes your relationship with the world and the way you think about yourself and others. Being that fragile and vulnerable is incredibly humbling but also allowed me to witness and comprehend things that I never had from a position of strength and independence. The sterile landscape of the isolation room in the cancer ward is at the same time utterly claustrophobic and somewhere your mind roams on an incredible journey like some desperate protagonist in a Cormac McCarthy novel.

There are things I've seen and experienced and learned – on a cellular level – that I would never have accessed if I'd been fit and well and able-bodied enough to keep up with the intensive pace that the mainstream theatre industry still (disappointingly) seems to overwhelmingly demand. The ruthless capitalist equation of measuring worth through hours of work undertaken and product generated makes no space for the incredibly important things that can be gleaned at more fragile or turbulent times of life, or periods of time where life goes at a different pace. Recovery, downtime and recuperation are viewed by a society brought up on capitalism (and deeply internalised) as unproductive states – and despite fighting this logic internally, there's still an ingrained layer of me that feels 'invalid' in both senses of the term.

This theme of 'recovery' is one which Tangled Feet are interested in exploring over the next couple of years.  I'm (obviously) not the only one recovering – as a population we are reeling from Covid (and long Covid), from grief, from the emotional, mental and psychological toll the last couple of years has wrought on us all. What can we learn from this enforced down-time, and the new perspectives that this trauma has inflicted on us? Can we lean in to the restorative, generative, imaginative possibilities of the 'recovery' (and perhaps in the process uncouple some of the harmful notions about productivity which capitalism forces on us?)

Throughout it all I've felt enormously grateful to be part of an ensemble and an artistic community (through Devo Evo) who have supported me and my family in all the important ways. Because it was built out of friendship, Tangled Feet has an unshakeable ethic of care, and always held a culture of belief in people's innate creativity through all the tricky phases in life – whether they are being 'productive' or not. We are artists still when we are ill, when we are pregnant or immersed in the work of looking after small children, when we are grieving, when we are taking a rest for our mental health – even when we step away from the industry and decide not to participate in it. Perhaps: we are artists not by virtue of what we produce but by virtue of the curiosity we hold about the world and the way we explore and live in it.

I don't have an amazing insightful conclusion to this blog. I'm still processing everything. There's no 'My Amazing Wisdom From My Battle With Cancer'. I'm out the other side of my stem cell transplant R and D but my trajectory with cancer doesn't have an end point. I am awaiting a PET scan which will hopefully be clear. And after that I'll be awaiting the next scan, and the next...R and D is ongoing.

But it felt important to me to share my R and D and the journey that I've been on over the last eight or nine months to date, so here we are.