First of all, I want to say I love my job and after working with Tangled Feet, I love my job with rejuvenated enthusiasm, a bag full of shiny tools, an insurmountable pride in our young co-creator team, and new possibilities of what we can bring to our work.

Just as a bit of background, Justine and I are directors of Rowan Tree Dramatherapy. Founded in 2013 as a Community Interest Company, we provide a Dramatherapy Service across Kent where we are committed and dedicated to working within the community to ensure Dramatherapy is both accessible and useful. We work extensively with young people, many of whom who do not live with their birth parents. Thanks to Children in Need, we have been able to offer fully funded group therapy each year for the past seven years to Children in Care. With each group, we create a space together that offers the potential to experience a sense of belonging that they have agency over moulding, shaping, and making their own. They have a voice, they are heard, and their feelings and emotions are validated. However, outside the therapy room, all too often these young people have had no choice and no voice, in what has happened in their past, and sometimes in their present, we always strive to support agency and wondered how could their voices become tangible?

Together, we tentatively considered how a piece of therapeutic theatre could be created and how this might look. We knew we did not have the knowledge or skill set to create the vision we had (it had to be spot on) and knew that it would take a theatre company that had great integrity and experience to pull this idea off. 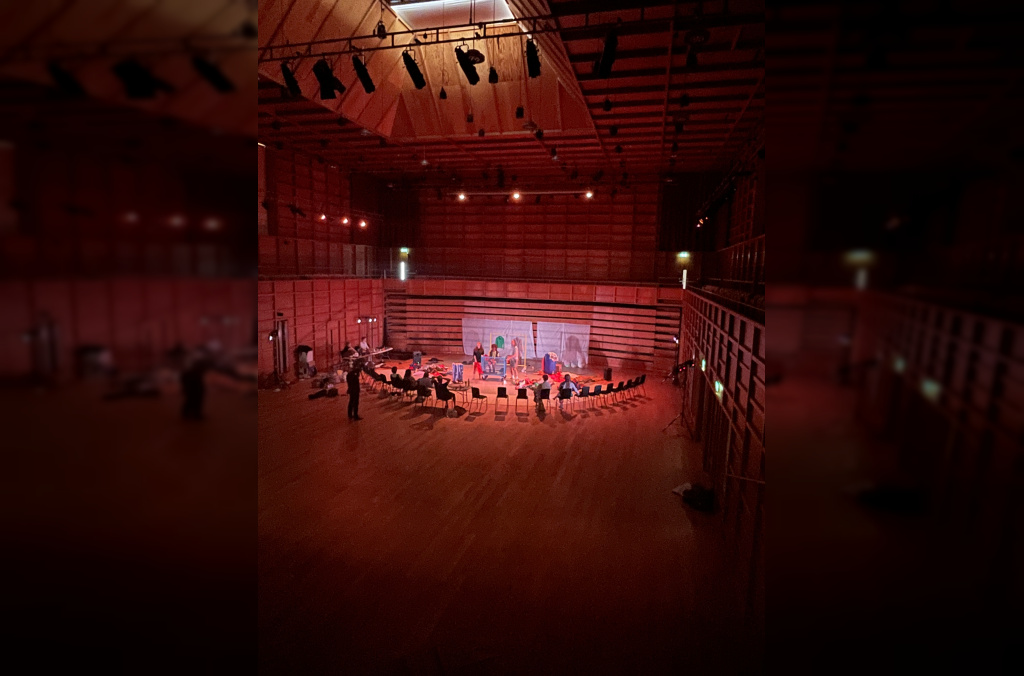 After meeting Nathan and assured by the warmth and sincerity of his approach to creating, we invited young people in care who we had worked with in the past, to become a new group of Co-Creators advising the development of the show. Our initial workshop with Nathan and Alex facilitating addressed any worries I had that the process would be too challenging for all of us; the evidence was in the bravery and generosity of our young Co-Creators sharing of fear, hope, and nightmares inspired by images during one exercise. Their creative capacity of course we knew, but their readiness to give a stage to the experience of being in foster care was breath taking. The workshop gave the clear message that the show had to hold hope. They found sooner than Justine and I could have imagined, a sense of purpose and belonging behind their lanyards of Co-Creator. Nathan’s clarity of their role within the making process was fundamental to this; they had an understanding that their individual lived stories were integral to the development of the show, but that these would inform and be held in essence, not presented as an account, in the final show. The creative process began with a shared curiosity which boded well.

The next stage of the Research and Development was to work with performers. Justine and I could not believe we got to watch the process begin. The organic creative process was awesome. Playfulness, fun, and spirit balanced with intent, abandonment, and loneliness. I found my notebook slipping and just wanting to absorb the phenomenon of the performing arts, working with the raw material, and translating this somehow into the impressionable visual. Physicality was key to exploring relationships and use of space. Mesmerising watching the light tinged with the shadow. Chairs, mirrors, doors, clothes were props used with clowning distraction where both Justine and I recognised strategies familiar to the young people.

We needed funding to give this show the gravitas it deserved. This was hard to find with funding avenues pausing or withdrawing due to the uncertain times. Covid also meant we could not safely meet as a group. Despite Justine and I maintaining contact periodically with our Co-Creators and Nathan, to offer each other reassurance of our commitment to the work ongoing, it was important we reformed with a workshop, so our words were put into action, particularly poignant for Children in Care where adults saying one thing is not enough. One of the group members had moved away and was no longer able to attend. They were missed for their energy, insight and creativity and held in mind throughout the rest of the project.

Covid had brought change for us all, yet the remaining Co-Creators were ready with apparent greater individual purpose and sense of responsibility. We also invited two new Co-Creators to join the group; we were so pleased they did.

Justine and I applied for funding from the Arts Council England. This was a learning minefield of an undertaking. We have applied numerous times for funding since our fruition as a company, but this was something else. We were challenged to think about how we were looking to bring Dramatherapy back to its roots. We had to apply for a piece of theatre not for a therapeutic intervention; we were pushed to really take this vision and write what we should, could, and would offer (in collaboration with Tangled Feet). This challenge was fully supported by Tangled Feet where their advice and guidance was invaluable, particularly when blurry and tired with application drafting, neither Justine or I could see clearly.

A show is created

The production team expanded. A Zoom meeting brought Justine and I back to the very real theatre making process of turning the skeletal bones of our initial intention, with the Co-Creators offering muscles and flesh, and now the team to connect with sinew and skin. I went quiet, noticing myself a little out of depth and lost as to where I could be useful to this final stage of rehearsals.

There was also some stuckness in the process for us all. The responsibility we all held with creating a show that had its roots in the experiences of children and young people in care brought about hesitancy and debilitating carefulness as we navigated a narrative and decided on who the characters were and how they related to each other.  What was the show saying, could we say ‘Mum’, was it set in a residential home or foster home, and did it need to be named? At this point our Co-Creators took us firmly by the hand and told us what they wanted to see. I was struck with how invested we had all become; I noticed, for example, one of the performers had the same Bruce Perry book I was reading tucked under her arm as she went off to get a train. I realised that the development of the show had evolved as each person in the team offered perspective and insight and expertise whether that be professional or moments of personal, everyone holding the young people at the centre of things. The balance of illuminating authentically the experiences of these young people yet with universal themes for all audience members to relate or find within the show. For Justine and me, we were aware of not being able to hold the material within a contained therapeutic space or workshop and had to allow the transition and trust the work. With a growing confidence in the process for our Co- Creators, their voices became bold and tangible, we saw that they connected with each other and different members of the team as they took on an interest in the music, the set, the characters, and direction. Their willingness to speak out was testament to Nathan and the entire team for the safe and playful space they created. 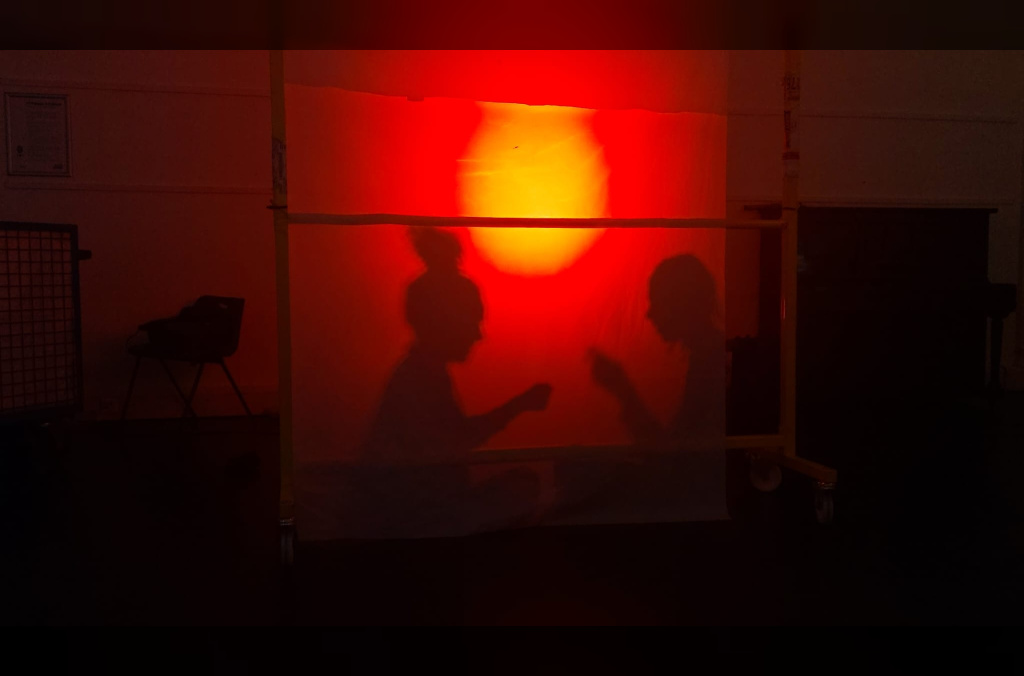 The set is recycled and transient mirroring the challenging experiences of the young people and making the show accessible to more venues such as school and community spaces. The props are meaningful and purposeful adding height to the very meaning of the show. But behind all this are the dedication of Nathan and Alex to keeping the Co-Creators at the very centre of their thinking. Their names are discreetly placed about the set, their voices can be heard in moments, even the characters’ names were their decision. Our time together developing the piece of theatre ended with two sharings; one at The Hat Factory Luton and one at The Colyer Fergusson Hall, Gulbenkian Theatre Canterbury. These sharings were trialling ideas to an audience of young people, some of whom were in care, therapists, carers and professionals surrounding the support of young people. Friendship, support of others, leaving home, the challenge of uncertainty, fear of being alone… are just some of the aspects that resonated for the audiences. The second sharing included our Co-Creators as audience members to give their feedback on the show and a brief workshop afterwards evaluating their experience.  One Co-Creator commented about what they wanted from the experience was ‘to create something younger people can relate to.’ The audience feedback was full of evidence that the show had done just that.

Justine and I felt, alongside our Co-Creators, such pride and celebration. For us the use of a therapeutic theatre process to bring our Dramatherapy work to a powerful, evocative show was incredible both professionally and as a personal experience. The young people we have and do work with are threaded into the show; their voices are indeed tangible; ‘Belongings’ as a completed show will tour in March 2023. An actual show! 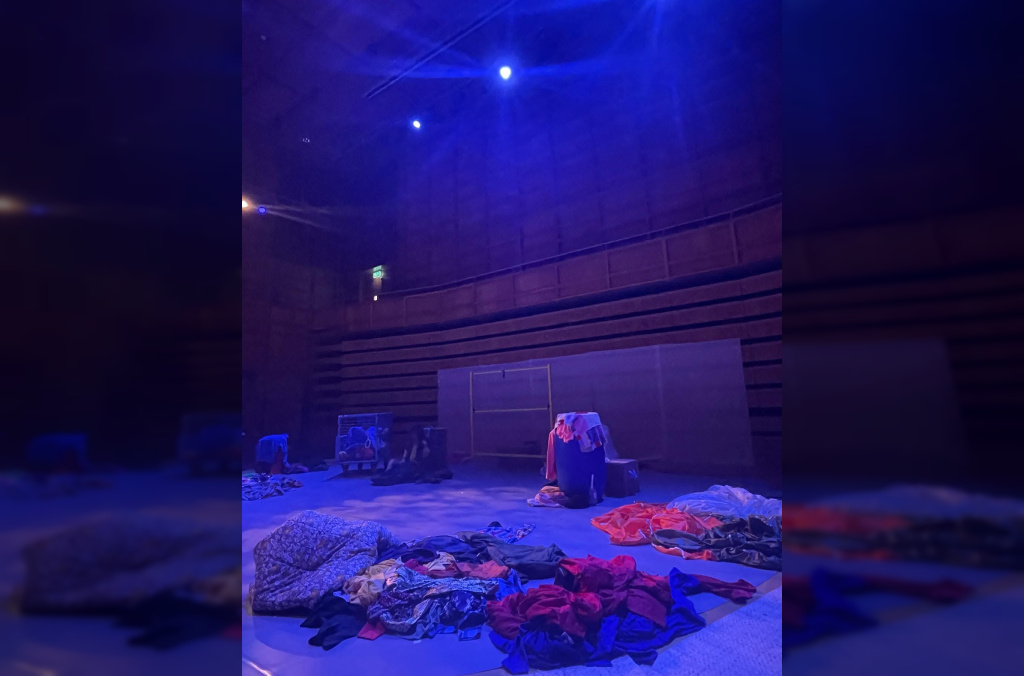