previousnext
There are three certainties in life: death, taxes and people getting angry about parking spaces. But what really fuels the road rage?
Come and witness a hilarious, acrobatic and absurdist mix of parking row meets full blown war (with cling film!)
Tangled Feet explore the lightening rod of our daily frustrations as two cars vie for a parking spot in a physical exploration of how conflict escalates. As the cars collide so do the occupants, their musical choices and the contents of the boot. Bonnets pop, roofs peel open and everything (and everyone!) starts to unhinge. Expect a host of surprises as the cars and their drivers start to unleash some anger!
With a blend of physical comedy, a pumping car radio soundtrack and spectacular silly stunts, Tangled Feet bring this turbo-charged caper to the middle of the high street. 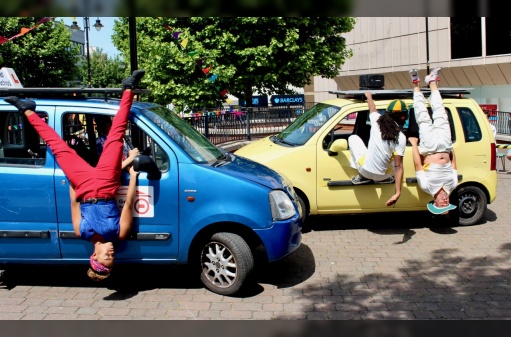 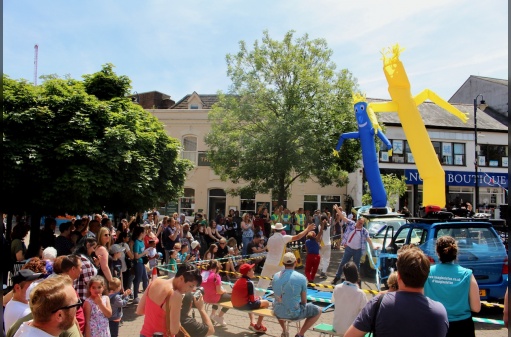 “ Incredible show! Absolutely loved it! ” - @Yeshyeshcharity via Twitter - “ That Parking Show was such a treat! Had me in stitches. Thank you @tangledfeet for all the fun and laughter ” - @HannahKelly via Twitter - “ We howled with laughter at That Parking Show @ImagineLuton yesterday... ” - @LutonBID via Twitter - “ I saw @tangledfeet perform in Luton yesterday and thought it was fabulous, an utterly original, bonkers piece of outdoor theatre ” - @StewCarr via Twitter - “ Smart slapstick fun; amusing and unexpectedly touching. Accessible clever popular entertainment - very well cast and performed - that in its own small but not insignificant way points out that despite conflict ‘peace on earth’ is possible. ” - @DonaldHutera (Dance critic) via Twitter -

What a year, collaborating with so many wonderful creatives on so many different projects and productions. Here is a look back at everything in 2019: Factory Reset September 2019. Photo by Greta Zabulyte   Need A Little Help toured for its 5th year running to the South East. That Parking Show hit the road for the second time touring nationally across the UK from Stockton all the way down to Bournemouth. R&D began on Rave New World, a new outdoor production for 2020/21. Development began for a new show about Looked After Children with Rowan Tree Dramatherapy. The Mindfulness Project, a collaboration with Adventure Yoga launched into schools & businesses across Luton. We mentored 4 young companies.